Throughout my travels as an author, young and aspiring writers often ask me how they themselves can become a great writer.

I usually chuckle – inwardly if not outwardly – not because the question is funny, but because it touches on something all authors seek: what’s the secret formula for success? And the answer is … it’s different for every author. 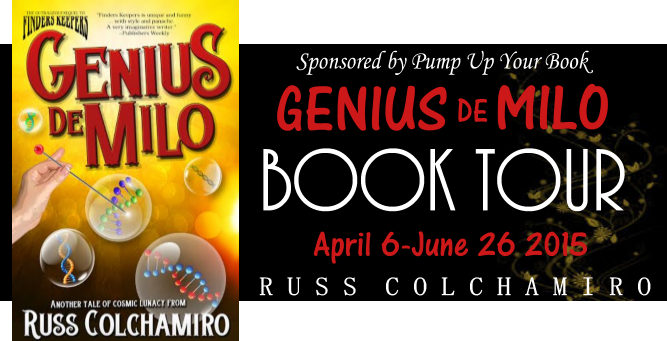 I’m not so sure I can turn you into a great writer, but for those who are willing to indulge me, here are my top 10 suggestions for improving as a writer:

In the Writer’s Chair: The Story Behind the Story – ‘Genius de Milo’

This guest blog originally appeared in The Story Behind the Book

Much like the structure of my novels, the story behind the story is a three part adventure …

Back in college I ran into a guy I knew a little bit, but not well. Scott. I was in the classroom building, and Scott asked me what I was up to. I told him I had a semester left of classes, and then I was going to do my student teaching (I was on track to become

He said: “Why don’t you take an extra semester and go on exchange to Europe?”

Immediately and without thinking about it I retorted, “I can’t.”

Stunned, I had no answer. I was so used to saying ‘no’ to life back then that I rejected the idea out of pure instinct. But I really wanted to be a ‘yes’ to life person. And going on this exchange program overseas was something I had really wanted to do, even though — back then — it was so unlike me to actually do it.

So immediately after Scott and I spoke I applied for and was accepted into the International exchange program. The next summer I spent a month backpacking across Europe, and then went to Manchester Metropolitan University in northern England for my final semester.

Funny thing was, I rarely ever saw Scott before that one encounter, and I never saw him after. Ever. But that one, single conversation helped changed my life, and though he doesn’t know it, I have Scott to thank for it. He was the specific catalyst I needed at that very moment in time and space.

That spirit, that magical quality of having just the right person at just the right time come into my life is the very spirit that I try to capture in my books, starting with Finders Keepers.

Which takes us back to the trip itself…

There’s a time in life when you’re caught in the netherworld between college and a career, when you’re not a student anymore but you don’t want to grow up, have a career, pay your bills. You know the drill. You’re stuck in that middle zone and I wanted Finders Keepers to capture that, that sense that anything is possible, but because anything is possible, it can get a little scary and overwhelming.

I hadn’t traveled much back then. I was still very naïve. This was in 1994, a completely different world than what we know today. There was no Internet, no cell phones, no Facebook or Twitter. You couldn’t Google a place to stay in Barcelona because there was no Google. If you were stuck in the middle of Romania in the middle of the night — which actually happened to me — guess what? You were actually stuck.

So while I was backpacking in Europe I had this very wild, frantic, unpredictable adventure that legitimately changed my outlook on life. I know it sounds cliché, but in my case it’s absolutely true. A lot of my trip — the people I met, the places I saw, the trouble I got into — made it into the novel, including a guy I met from New Zealand, who became one of my best friends.

About a year later he came out to see me in the U.S., when I was living in Tempe, Arizona, and then fast forward again to early 2001 and I went to see him this time, in New Zealand.

As I say in my new book, Genius de Milo, the sequel to Finders Keepers, he and I only seem to do things big. And I’m not typically a do-things-big kinda guy. But our adventures together are the backbone of the series.

On a totally separate track … I had been tinkering around with a couple of story ideas and one day, out of nowhere, a line popped into my head:

“Jason Medley had on his night stand a jar that contained the essence of the universe”.

And I said to myself: “Who in the heck is Jason Medley and what on God’s green earth is the essence of the universe?”

I really didn’t know the answer to either, but after going on these travels and collecting notes, I started to see the narrative coming together, linking these outrageous trips I took with this tale of cosmic lunacy — an Earthbound backpacking trip meets Hitchhiker’s Guide to the Galaxy.

And thus the Finders Keepers series was born.

My newest book, Genius de Milo, is the second book in the trilogy, where my bumbling backpacking heroes Jason Medley and Theo Barnes — based on me and my pal from New Zealand — are once again tasked with retrieving a radioactive jar filled with the Universe’s DNA … before it wipes out the galaxy.

And once I take a little breather, I’ll be writing the third and final book in the Finders Keepers trilogy. I’ll just need to take one more trip to pull it all together …