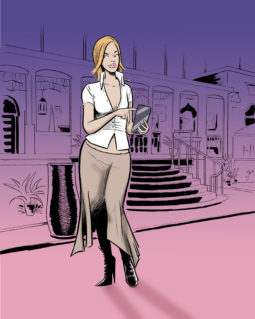 Name: Jamie
Age: 27
Hometown: Eternity
Famous Family: Lex (brother)
Occupation: Director of Operations, The Rubicon Hotel
Earthly Delight: While on a (semi) voluntary trip to Earth, Jamie encounters Jason Medley and Theo Barnes. Much to Jason’s irritation and mistrust, Jamie has an instant and mutual attraction to Theo. That connection lingers up through Eternity.

While Jason has a similar connection with Lilly, it was apparently Theo’s turn to be tempted to the point of confusion, a relationship that I hadn’t intentionally written. It just kinda wrote itself. Jamie doesn’t realize it until the very end of the series, but her connection to Theo is far more significant and actually taps into far reaching implications that will eventually impact them both–and the Universe itself–in ways they initially could never have imagined.

The Character: Whereas her brother Lex enjoyed his life as a ‘fun guy’ in Eternity with a weakness for powerful women, I always saw Jamie as a powerful woman herself who up until we meet her hid from that power, because deep down it frightened her. As such she accepted a lesser station in life, until circumstance force her into action. Only then, starting with a journey to Earth, does she begin to accept her strength, until, finally, she realizes who–and what–she was always meant to be.

Jamie doesn’t show up in the series until the second book, Genius de Milo, but her impact is significant on multiple levels, even when she’s not overtly in the middle of the action. Like many characters in the series, when we first meet Jamie, her life has a distinct texture. When the series concludes, it is very different indeed.

The Illustration: By the time we reach Astropalooza, Jamie has fully embraced her status, and her day-to-day role in Eternity, running The Rubicon Hotel. I asked Rich Koslowski to have Jamie in a confident, but alluring business attire, since the hotel itself is a destination for some of Eternity’s most powerful visitors.

You’ll also notice that Jamie is holding a tablet. It seems like a minor point in the narrative, but it’s actually linked to something incredibly important. The staircase behind her gives you an additional sense of the scope and elegance of the location.