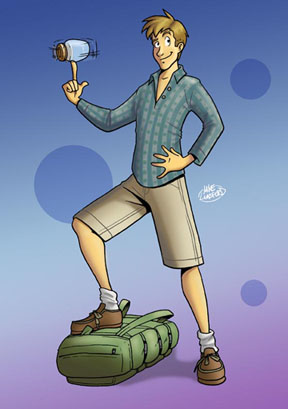 The Character: Here we have Theo Karnes, one of the heroes of FINDERS KEEPERS. He’s a young, adventurous sort from Auckland, New Zealand, who often jumps into the unknown, rather than being cautious. He’s not a super social type–he’s fairly quiet and prefers going it alone overall–but he’d much rather take a chance at some good fun and get burned, then miss out on something really wild. And believe me, Theo gets WAY more than he bargains for. You’ll just have to buy the published novel when it comes out to see what I mean …

Theo is also more the daredevil, which was especially fun to write. But because he’s so self-reliant and doesn’t like to explain himself (about where he goes, what he does or what he thinks and feels), I wanted to explore what it would mean to him if he met a new friend, where they felt like a team. How would Theo handle the idea of relinquishing some independence in exchange for companionship? Would it challenge–or change–how he thinks about his own life?

The Illustration: I wanted Mike to include Theo’s backpack, as that’s a key part of his gear. And that jar. Oooh. Had to have the jar, as a search for that little bugger fuels a lot of the action.