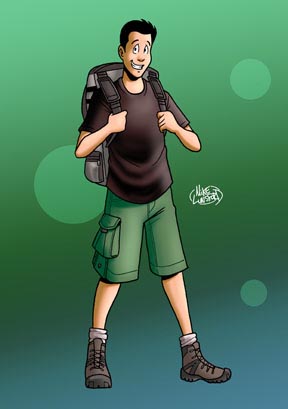 Name: Jason Medley
Age: 24
Hometown: Seaford, New York
Family: Lenny (dad), Rhona (mom); parents divorced; Jill (older sister, 29)
Occupation: Waiter
Aspirations: To get a job as a high school English Teacher (or so he thinks); to be in love (or so he thinks)
Strangest Injury: While playing whiffle ball in front of his house, Jason tripped over the curb across the street and landed on his right elbow, breaking it. The elbow required surgery and a cast, leaving a scar. The first recorded injury in whiffle ball history.

The Character: As one of the main characters of FINDERS KEEPERS, Jason Medley was tricky to write. My goal was to start him off as being fairly lost and unprepared–both as a traveler and a young man–and through his struggles and adventures abroad have him grow in perspective and confidence. At 24 and a product of suburban living, Jason is common to many people his age: now that he’s graduated college (certified as an English teacher, but no job yet), he’s overwhelmed by the prospect of making his own way in the world while simultaneously frustrated that his life isn’t progressing faster than it is.

Jason is also burdened by a false sense of expectation–he feels that he’s supposed to live up to ideals and roles that don’t really suit him, but he doesn’t recognize that he has options.

What I hoped to accomplish with Jason was let his inner magic come out, but only when faced with challenge and adversity, until it finally becomes more instinctive for him. I think you’ll find that Jason has one heckuva time getting himself going in Europe. But once he starts meeting new people, they tap into the passion he keeps buried, and ultimately he finds a whole new part of himself, even if he doesn’t know where he’s headed next. And none of this comes easy for Jason. Not by a long shot.

The Illustration: I told Mike that I wanted Jason to have his thumbs hooked through the straps of his rucksack, and also to have sort of a wide-eyed look about him. Jason is more the naive hero, and I wanted to convey his sense of whimsy and wonder as he sees new places and meets new people that wind up changing him forever.