Chill – The Shaman of Grinroad

Name: Malcolm Quincy Reneau
Also Known As: Chill
Age: 58
Status: Widowed
Shaman’s Poke in the Eye: In one critical scene he inadvertently pokes Marcus Powell in the eye — or was it intentional? — sending Powell on a vision quest that alters his journey in a way Powell never would have considered possible, even after all he’d been through up until that point. 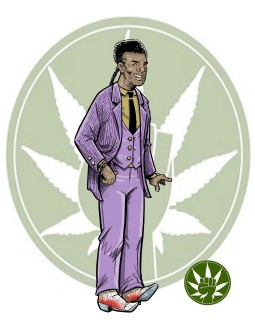 The Character: Chill is Grinroad’s spiritual leader, and a late blooming Shaman. He has visions, which helps inform how he guides those around him, and plays a pivotal role for Powell, and the entire community. He’s also a bit of a pot-head.  Don’t be mistaken, though. He’s a serious man, who has already lost his wife and children due to war. He knows where he fits into the grand scheme of their struggle, even if the others don’t.

Chill is also tied to Carlos Guerra, which continues to haunt him. Carlos — aka Riva — is a dangerous, troubled young  man. Their two fates are inextricably linked.

As a matter of background, Chill is based on someone important to me — but with a comic twist. Chill’s motivations are his own and distinct from the real man, but nevertheless I carried the ‘real Chill’ with me throughout the writing process.

The Illustration: This is another illustration I just love. I gave Rich very specific instructions on how Chill should look, down to the corduroy suit to the long braid in back.  Rich went with purple, which really nails the character. And the hemp leaf in the background pretty much smokes, er, speaks for itself.