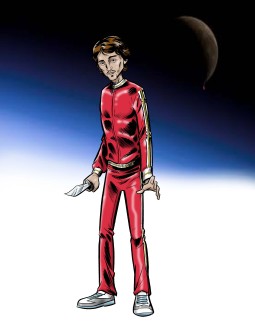 Also Known As: Riva
Age: 23
Hometown: Grinroad, Aretha (alternate Earth)
Preferred instrument of death: Knife
Born this way?: Carlos was an unstable child, who, under ideal circumstances, could have benefited from medical intervention and treatment, and almost certainly an institution. But he was likely beyond true help.  And then war left him orphaned, which, when coupled with his instability, pushed him toward more disturbing acts of violence.
Method to the Madness: Despite the apparent random nature of his violence, Carlos indeed believed that he was building toward something significant, one that would define him forever.
Chll in the Air: Carlos is tied to Chill in a way that comes to define them both in inauspicious ways.

The Character: For me, Carlos Guerra — or Riva, as he becomes — was critical to the story. Yes, Crossline is a fun adventure that I hope will leave readers with a smile on their face. A bit of a wow experience. But there’s a war going on here, and it was important to me that Powell and co. embark on a journey that included the physical embodiment of the terror and violence of war.

I didn’t want another Darth Vader type, because that would have overloaded the story. Riva is a wild card, an unpredictable element that leaves others unable to prepare. It’s that very threat of potential and sudden violence — that constant unknown — that adds a subtle, yet critical level of anxiety I wanted the characters, and the reader, to experience.

The Illustration: This was one of the toughest illustrations for Rich and I to get right, and mostly because of me. I had a very clear idea of what Carlos was supposed to look like, but  I didn’t articulate those well enough to Rich at first, I think, because I was vacillating between how I envisioned Carlos as I first saw him in my mind’s eye, and how the character evolved once I figured out who he really was. I was pulling details from his old self and new self, and combining them into a morphed character.

I told Rich to model him slightly on the actor Diego Luna, and once he got the face, the character came to life. Because Carlos is violent, I didn’t want him also to be physically imposing. Instead I saw him as a skinny twerp when viewed from a distance, but totally ripped underneath his shirt, like Bruce Lee. That flyweight boxer type. Pretty small, packs a wallop. He  attacks with speed and precision.

In terms of his clothes, Carlos is just a teenager when we get the first real glimpse of his origin, and doesn’t have a classic ‘villain’s’ getup. I wanted him in more of a cat burglar attire, which makes sense when you read the book. Rich colored it red, to be red like blood. Speaking of which, if you look carefully in the background, I had Rich include blood dripping off the point of the Moon. One of my favorite details in the whole collection of illustrations.