Filed under General, In the Writer's Chair, Newsletter, Rants 0

With just two weeks until Liz and I jump off to Mexico to celebrate our ten year wedding anniversay — yep, it’s been ten years! Whoa! — I’ve got a special Finders Keepers update I think you’ll enjoy:

* As Finders Keepers continues to make its way in the world, it recently reached a pretty cool milestone. For those of you who are unaware, I was one of just a handful of 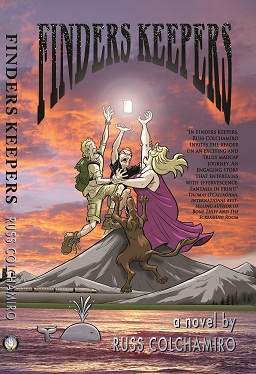 authors hand-picked a while back by Publishers Weekly to participate in one of its new partner outlets — Wattpad.com — to post content online. The Wattpad Web site is designed to give up-and-coming authors a venue to post their work, and, ultimately, get discovered.

With a steady readership I’m proud to say that Finders Keepers has now reached and surpassed the 500,000 hits plateau. That’s right, readers have now clicked on to at least portions of my debut novel more than a half a million times.

What will this all mean?

Not sure yet, but either way I’m feeling pretty darn good about it. And — pardon the pun — the hits just keep on coming. Is it possible I’ll eventually reach 1 million hits? Let’s find out …

BIG BIG BIG THANKS! to Publishers Weekly, Wattpad, and all the fans who keep on reading!

* And speaking of Finders Keepers, I have now begun my initial work on the first of two sequels! Yep. At long last I am revisiting the adventures of our international and cosmic globetrotting knuckleheads Jason Medley and Theo Barnes, and already have a pretty good idea of the kind of trouble they’ll be getting themselves into this time.

There’s loads more to discuss, including highlights from the 2012 NY Comic-Con, but I’ll be sharing those in a special edition newsletter real soon.