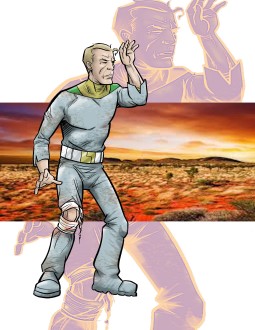 Age: 33
Family: Married to Keela Amos
Occupation: Space Pilot
Early Motivation: as a child, Mitri’s father was a bit of daredevil, who got a real thrill out of being the ‘first’, pushing the envelope. Mitri’s father than suffered from a debilitating injury. Mitri was greatly impacted by both.
Lost in Space: Mitri volunteered to seek out a new, habitable planet for the possible relocation of his fellow Grinroadians. But he was waylaid through a wormhole, and never returned. Though his whereabouts are unknown to his people, the journey he takes has a far greater impact on the entire novel than any of the characters could have possibly imagined.

The Character: Mitri is in many ways the mirror character to Powell, although the circumstances they face are far different. In searching for a new planet to settle upon, Mitri understands that his is likely a suicide mission, but when you are in dire straights, you sometimes have no better options. Mitri’s travels put him in precarious situation, with his life quite literary hanging in the balance.

The Illustration:  Another fantastic illustration by Rich. You’ll see that Mitri is in his flight suit, all beat up, and lost in the desert. This has particular resonance given the trouble he encounters in the novel. The shadow background is another great touch by Rich, as it calls upon both the inner and outer self, again, significant to Mitir’s story.