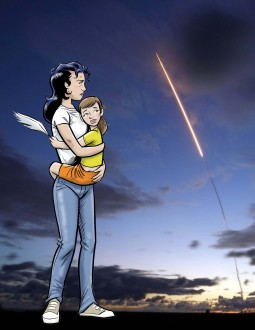 Occupation: School Teacher
Name: Jesse Powell (five)
Hometown: Houston, Tx
Bad habits: Chandra is a mother, and a teacher, and has a bit of a weed habit. But for Chandra, it’s part of her culture. Sure, she likes her wacky tabacky, but home grown marijuana use for spiritual quests has been in her Cherokee bloodlines for centuries. It is also a source of contention between Chandra and Marcus Powell. But will it lead to their salvation?
Sight Unseen?: Even at her young age Jesse seems to have an intuitive reach stemming from her Grandmother, an ability to commune with the spirits. Or is it something else? In either case, young Jesse does not have a large role in Crossline, but her presence is significant.

The Characters: It was critical for me that Chandra and Jesse stand as Powell’s central motivation. Chandra and Jesse are both strong female characters, who in many ways are the real heroes of this story. They are dedicated, fiercely loyal, and, when they need it most, inventive, unpredictable, and surprising in the best of ways. As much as Powell is trying to survive a battle on an alternate Earth, Chandra and Jesse are doing all they can to pave the way for his return.

The Illustration: I like Rich‘s use here of illustration mixed with photo imagery. I wanted Jesse in Chandra’s arms, as they watch Powell’s rocket launch from a distance. It signifies their physical, emotional, and spiritual distance from one another, which is amplified after Powell vanishes through a wormhole, and is, for a time at least, presumed dead. And note the feather in Jesse’s hand. It’s a specific reference to another strong female character.