After 4 episodes of ‪Daredevil‬ on ‎Netflix‬, they are really getting it right, with a show much better — and more solid — than I think we had a right to expect. I love that they film in New York rather than using stand-ins, with Vincent D’Onfrio as Wilson Fisk, Rosario Dawson as nurse Claire and Vondie Curtis-Hall as reporter Ben Urich as standouts. 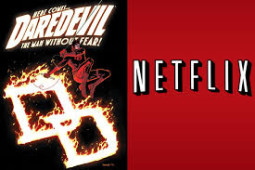 I also appreciate a lot of the shadowy lighting, which gives the tone of the show a realism that often is lacking in genre TV. And I thought they did a really nice job with the back story of Battlin’ Jack Murdock, which is so important to Matt Murdock/Daredevil’s motivations.

If there’s a weakness in the show, for me it’s actually Charlie Cox as Daredevil himself. He’s not bad. Don’t get me wrong. It’s a tough role to play. But it’s obvious that he’s struggling w the American accent, forcing himself to ‘sound’ American, with a lot of the charisma he showed in Boardwalk Empire somewhat lacking here.

Brit Charlie Hunnam said he had the same issue during the first season of Sons of Anarchy, focusing so hard on making his facial muscles contort to the sound of the American dialect that he found his breathing restricted, which thus made him more rigid than he wanted. But once he got the hang of it, he got much loser, and it showed in his performance throughout the rest of the series.

So maybe the same will happen for Charlie Cox.

I also find Elden Henson working just a little too hard as Foggy Nelson. If he would ease up even just a little bit, it would go a long way.

In any case, there’s really just so much to like here I can’t wait to see what comes next.

Daredevil is off to a great start.