Although I’m a little behind this season I’ve really been enjoying Arrow, and based on how it’s developed so far I’m confident it will keep getting better and better. Agents of SHIELD is, well, let’s just walk on by and leave that to others to pick on.

But if we’re talking about genre shows that I love, where I just can’t get enough, the conversation begins and ends with Orphan Black, on BBC America. 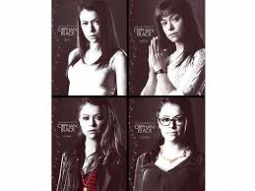 Orphan Black is a dark, twisty, fast-paced conspiracy thriller with maybe the best performance … ever? … by an actress in any show, and I would argue the best of any genre show for sure. Tatiana Maslany is nothing short of brilliant playing nine — yep, nine — totally unique versions of the same character. I have no idea how they pulled it off, but man oh man they did.

But it’s not a one-woman show. It’s got a full cast of characters you either root for, or against — a shout out to Jordan Gavaris as Felix – and whereas they could have dragged out this 10 episode season into multiple seasons, just to milk it, they went full throttle and brought us so far so fast, without ever leaving us behind, that you just have to hang on try to catch your breath.

If there’s a problem with Orphan Black, it’s that they actually did pack so much story into season 1, it will be difficult to replicate the quality over season 2. But if there’s any show that might just pull it off, I’m putting my money on Orphan Black.

Oh. Yes, please. Just tell me when and where Orphan Black is airing next, and I’m showing up.

* Note: This blog was originally posted on the Crazy 8 Press Web site: http://www.crazy8press.com/2013/12/16/orphan-black-accept-no-substitute/