Filed under General, In the Writer's Chair 0

I’ll just come right out and say it.

I rarely read Stephen King. Not because he isn’t good. It’s that I don’t like horror.  So me and his stories … not so much. And therein lays the irony. Here’s why:

As part of our Crazy 8 Press theme this month, we challenged one another to blog about a piece of writing that inspires us as authors ourselves. 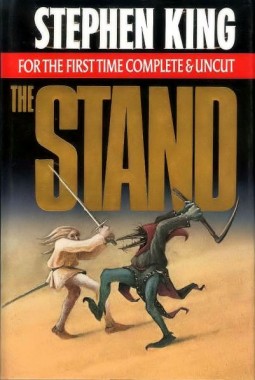 In my previous life I received a degree in Secondary English Education from Buffalo State College. My plan — as man much younger than I am today — was to become a full-time high school English teacher. But after graduation I switched gears and went into journalism instead, and now I write novels.

Anyhoo, as part of my teacher’s course load at the time I was required to take a class in teaching writing. Enter said mad author scientist Stephen King. For my final paper — which counted for half of my semester’s grade — I wrote about (and gave a presentation on) the inherent value in teaching The Stand.

In particular I noted the epic novel’s modeling of dialogue, setting, tension, and character development. Granted, I found the book’s ending a bit weak, but the first 850 pages — eight hundred and fifty! — are absolutely mesmerizing. Trashcan Man. Fran. The Walking Dude, a.k.a. Randall Flagg. Whoa. I’ll never forget them.

The opening scene at the military site. The cough in the movie theater. And that heart-thumping trek through the Midtown Tunnel? Yikes. Talk about feeling like you’re in a moment — a moment so vivid and intense I could barely breathe — or wait to see what happened next.

But let’s return to Buffalo State College. I remember the scene vividly. It was the fall of 1993, in the English Department. The corner classroom was large, so there were many windows, and though the day was overcast, a beam of light shone on the floor, at my feet. I took it as a sign.

Because back then, the ‘Stephen King is a literary doofus-horror-hack-loser-disgrace-to-all-writers and writing’ campaign among the literati was in full effect, and as an emerging English teacher, not overtly championing classic ‘literature’ was equally popular.

But if you’re going to stand up among your peers and profess the writing of Stephen King as a viable English teaching tool … you gotta just go for it. Can’t hold back.

So as I stood before my classmates, and announced my topic, I endured the expected gaggle of snickers, eye rolls, and thought balloons casting all sorts of clever insults my way: Stephen King? I think Colchamrio will be pumping gas before teaching class! Ha!

But you know what? I didn’t care.

To this day, any time I get hit with writer’s block, I stop what I’m doing, reach up to my bookshelf, open to any random page from my hardbound copy of The Stand, and within moments I’m inspired. I must have done this a dozen times as I wrote Finders Keepers, and another handful as I wrote Crossline.

If I have an author’s inspiration bible … The Stand is it. It has served me well, and continues to do so.

As for my Stephen King presentation? I endured.

* Note: This blog was originally posted on the Crazy 8 Press Web site: http://www.crazy8press.com/2013/10/21/authors-inspiration-taking-a-stand-for-stephen-king/