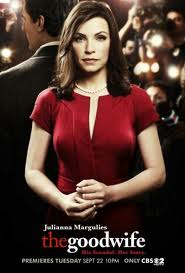 My initial reaction to The Good Wife, before even having seen it was, meh. Not interested. But then I kept hearing how great it was, so I gave it a shot. Having watched all of Season 1, I can say that the quality of the shows is somewhere in the middle.

What Works: The chemistry between the characters is generally good, and the actors all do pretty well with their roles. There’s good tension between the characters and as the season progressed the relationships started to develop. There’s also good, inherent drama with the premise. Julianna Marguiles is Alicia Florek, the spurned wife of Chris Noth’s ridiculed former State’s Attorney, who had an illicit affair and went to jail for alleged crooked dealings. Now she’s a lawyer trying to make a career for herself—despite her husband’s name—but keeps running into those who either judge her for it, or want her to use the political influence she wants to deny she actually has. Plus there’s a potential love triangle here, so lot’s of pulpy drama.

What Doesn’t: Man oh man the plots be dumb as a post. My biggest problem with The Good Wife is that it isn’t really sure what kind of show it wants to be. A pulpy political/office workplace love drama, or a case-of-the-week lawyer show. Problem is, the cases are very silly and often implausible. There are too many examples to list here, but for one, how about the episode where the building managers in the Floreks’ building just happen to be diamond smugglers? Naturally.

Or the one where an injured plaintiff’s wife just happens to have access to a jury pool, so she can screen for someone who’d be open to a bribe … and then has the mojo to arrange back alley payments to throw the case? Wow. She’s good.

Or that the Florek’s 15-year-old son can detect uneven light patterns reflected back in his dad’s eye in a photograph to prove a steamy, drug-fueled photo was a fake—but all law enforcement missed it. Uh. Yeah. I can go on and on. And why does every case need to be wrapped up each week? Lazy plotting.

Final Thoughts: Despite the show’s inherent flaws, it’s still enough of a fast-paced, love-triangle/political chess match to keep me interested. Good characters with juicy entanglements overcome the silly and often implausible storylines, although there are many times when I cringe at the ridiculous plotting. I will say that the second half of the season was much better than the first, so I’m hoping this bodes well for future seasons. As for the first run, fun trumps logic. But just barely.