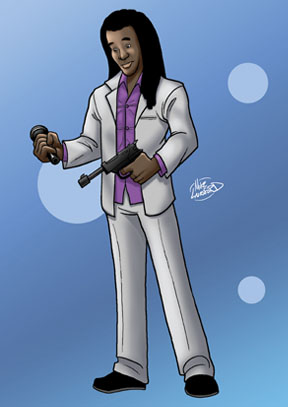 The Character: Rufus has always been an interesting character to me because he started out as being one person, but becoming another. My original vision of him was to be just a standard bad guy drug dealer type, who served a certain purpose. But it didn’t work. The character had no real depth, and, quite frankly, wasn’t the least bit interesting. So I scrapped weeks of work and started over.

Rufus is a secondary character, but he serves a fairly important function in the narrative. I won’t say what that is, and while I didn’t spend a lot of time with him within the pages of Finders Keepers, I found that the more I figured out who he was, the more I liked him. And his importance extends just beyond plot points, as he has interacts with certain characters, who learn a lot about themselves just by dealing with Rufus.

So while Rufus isn’t a main player, he’s sneaky important.

The Illustration: This illustration was one of the tougher ones to pull off. My original art direction to Mike was on point, but through no fault of his, the illustration just didn’t look as good in reality as I thought it would when I conceived of it. So Mike was patient enough to work with me on a few rounds of revisions until he could the illustration to fit my intentions.

If you’ll notice, Rufus is holding a microphone in one hand a gun (a particular type of gun, as well) in the other. The reasons will become obvious once you read Finders Keepers, but I’ll just have to keep that a secret for the time being. What I will say is that he looks torn between what he’s holding in each hand, which mirrors his own struggles as a person.