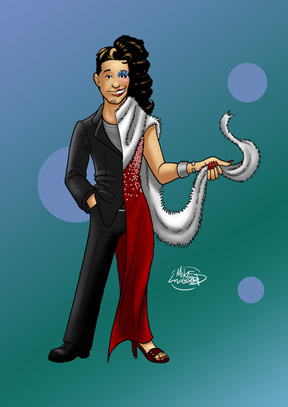 The Character: Just by looking at the illustration, I’m sure you can tell that the George/Angelique character tends toward the more outrageous. As happens during the writing process, this character just sort of appeared out of nowhere. Angelique came first, and then Geroge followed not long after. I had a good grasp early on that Angelique was a drag queen, but the depth of the George half came a little later.

As the illustration shows, the two halves of the character are completely different. One is more staid and professional, the other wild and completely over the top. This split character serves a very particular function in Finders Keepers, but I also wanted to explore the inner workings of how we identify with ourselves and other people, how we actually have multiple sides to our personalities, and that some can become more dominating than others, depending on how we’re feeling, or our circumstances. I’m not going to say which direction George/Angelique actually traveled, but ultimately, I had a good time letting the two sides of this character decide for themselves who would win out.

The Illustration: When I first pitched this illustration idea to Mike, I said that this was going to be his Two-Face (from Batman). George/Angelique is essentially a split personality, or, to be more exact, an alter ego. Each personality is authentic in its own way, co-existing, with one half more dominant depending upon the situation.

So what I wanted was George on one half, dressed in a sleek Armani suit with a solid shirt beneath. Plain, but impressive, yet with darker, muted colors. George doesn’t like to draw attention to himself. His expression is also almost a little dour, a little sad.You might not notice him in a crowd.

On the other hand, the Angelique personality is loud and outrageous. She loves, loves, LOVES attention, and so I wanted Mike to give her a bright dress with sequins, high heels, a wig and too much make-up. She’s a big drama queen and loves to make spectacle.

My hope was that the two halves would be in stark contradiction, with each standing out more because of it.