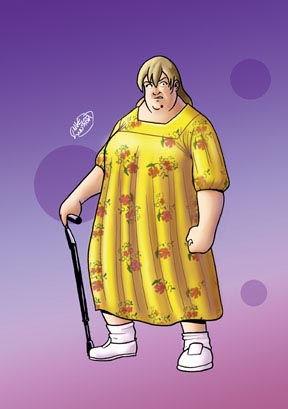 So why the two versions? Well … you’ll just have to read FINDERS KEEPERS to find out, but I will tell you that Emma—this Emma—has been banished to Earth, and let me tell you … she ain’t the least bit happy about it (if you want to see why, check out her alter ego in the preceeding illustration). In fact, she’s downright nasty and bitter, and will manipulate anyone to get what she wants. In her old life—up in Eternity—she was a high-profile, on-the-move galaxy designer, but after committing a major no-no, Emma ended up in the desert back roads of Yuma, Arizona. On Earth.

And oh yeah. She used to be hot. Smokin. Friggin. Hot.

There are several ironies about Emma and her situation, but her main role is that she’s searching for a particular glass jar … (hint: what does Theo Karnes have in his hand?) … that will send her back home, if only she can get to it first. She’s not the only one who wants the jar, and it’s everyone for themselves when it comes to retrieving it.

With Emma, I wanted to explore the ideas of ego, expectations and vanity. Since she was so influential in one plain, I thought it would be interesting to see how far someone in her visible, media-savvy position could fall in another, how that happened and the impact of losing physical, social and economic status. My goal was to mine the layers of her personality, and see just how much humanity was really in there.

Emma is also accompanied by Lex, a brown Lab. But in Eternity, where he’s also from … not so much. But that’s Lex’s story, and I’ll leave that for his section.

The Illustration:
Emma is big. Very. Big. And that’s just what I told Mike I wanted. She had to have girth—chubby arms and legs—but also someone who looked like she has real physical power. I also wanted her to have a face that could be sorta nice if she lost the weight and took care of herself, but since that’s not the case, she’s p.o.’d, and needed to have a “what the $#@! are you lookin’ at” kinda look.

It was also important that she had her walking stick, as that illustrates her inability to get around physically, which forces her to seek outside help in her quest, thus bringing an important character into the story.

And that mole on her chin. There’s one chapter in particular where she does battle with that hideous thing … eesh. Not good.