Home / Blog / General / There and Back Again: The Evolution of a Chris Daughtry Fan

There and Back Again: The Evolution of a Chris Daughtry Fan

Be with me. Here’s the scene:

My apartment. Queens, NY. Saturday morning. The sun is shining. I go to the computer, and load up iTunes. I scroll for Chris Daughtry’s new album, Break the Spell. I click on the third song, Outta My Head. I turn up the volume. Loud.

I turn toward the front of my apartment. My twins — who are 20 months old — are in their high chairs waiting for me to feed them breakfast. Waffles and strawberries. Their backs are to me. And we hear:

I thought it would be easy, but it ain’t for me
It’s kinda hard, when you lay your heart on a one-way street

My son, then my daughter. First one hand, then the other.

I really thought by NOW!
You would’ve slipped my mind
But the kind of love sent from above is the killing kind …

My kids are fist pumping. They are head banging. And all because Chris Daughtry is bringin’ it.

Rock is in the air. Life is good.

In fact, I dismissed his music.

When Chris first came on the scene back in 2006, all I knew was that “the rocker dude” from American Idol got voted off, and apparently it was unfair. I never saw the show, and had zero interest in learning more.

Yet my sister Alison said — repeatedly, ad nauseam — that Chris was the man.

Fast forward a few years and two albums later. At this point the only Daughtry songs I know are from the radio: What About Now, Feels Like Tonight and Life After You. These songs aren’t bad, but let’s face it. They’re not really directed at me.

To my classic rock-loving ear, Daughtry was very … Meh.

And though my sister insisted — avalanche-style — that Chris was awesome, I rejected her assessment. Here’s a typical exchange:

Alison: Dude. Listen to his voice.

Alison: Just give him a chance!

Me: I’ve heard the songs. They’re all the same to me. Snore.

What I Meant to Say

Whether I was truly convinced that there was more to Daughtry than I gave him credit for — or I simply wilted beneath my sister’s onslaught — I finally listened to Chris’ first two albums, Daughtry and Leave This Town. I focused on certain tracks. No Surprise. Supernatural. Ghost of 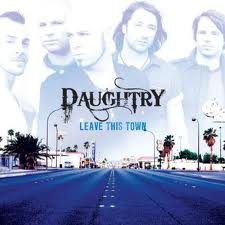 Me. Crashed. Every Time You Turn Around.

And eventually I admitted … okay, this is better than I thought.

But you know what really got me? That ass-kicking vocal hook in What I Meant to Say:

And I just thought … that you should know
That I’ve been holding on while you’ve been letting GO!

Now I’m starting to feel it. And I think: whoa, this guy’s voice is BOOMIN’. There are some great hooks. But I couldn’t understand why the more rockin’ tunes didn’t get more radio play.

Then it clicked for me. Chris was facing a marketing obstacle I hadn’t initially appreciated. The record label was putting out the songs they thought would sell. Fair enough. But in doing so they didn’t necessarily showcase who Chris really is.

They pumped out more of his softer-side tunes, keeping his potent, overdrive mojo a secret from rock n’ roll fans like me. I didn’t get Chris Daughtry at first because I didn’t know to look for him. As far as I knew, that guy didn’t even exist.

But he does. Trust me. He does.

Having finally been converted, I was then educated that Daughtry isn’t just Chris with a backing band. Together, all the musicians — who co-write many of the songs and form the sound — make up Daughtry. This isn’t just a one-man show.

So by this point I’m diggin’ a bunch of Daughtry tunes … yet I still found the first two albums to be fairly similar. And despite the band’s talent, to me the overall quality of the song-writing just hadn’t caught up with that Hall of Fame voice.

Which then led me to ask: Will this band grow? Will the songwriting become richer and more intricate — textured with subtly and nuance? Will the guys trust themselves enough to layer more technical sophistication to their musical instincts and let their sound evolve as it naturally wants to? Or will Daughtry essentially release a third version of the same album?

Translation: Guys, I like you pretty okay, but I want to hear more. You can do better. You. Can do. Better.

And guess what? They did. Big time.

Break the Spell is — by a large margin – Daughtry’s most developed, confident 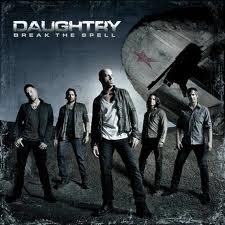 and satisfying album. No dis on the first two records, but with BTS the boys took a significant, creative leap.

Or listen to Chris’ falsetto rising in Losing My Mind.

Get completely absorbed by the surging, devil-eyed chorus of the BTS title track:

And the album’s most deliciously confessional lyric, from Losing My Mind:

You’re one part angel, one part danger
But, oh, the kind of crazy I like …

Oh, yeah. It’s go time. Daughtry is no longer just a solid, radio-friendly band with a killer voice at its core. They have begun their ascent as a musical force. They will stand the test of time.

Off on a Spaceship

Back in my apartment. My kids in high chairs. I’m feeding them breakfast. BTS is playing. Spaceship:

My daughter smiles, with strawberries on her face. My son then looks at me, looks at his sister, and we hear:

Rock is in the air. Daughtry.

And life is good.