With 2011 wrapped up I was all ready for my annual top 10 lists for best movies and best TV shows.

Well … through a combination of not enough time to get to everything I want to see — I knew fatherhood would slow me down somewhere — and a rather lackluster year of entertainment, I’ll be mixing things up this time around.

Rather than my usual top 10 in each category — TV and movies — what follows is a top 10 list of my favorites — TV, movies, moments and performances — all rolled up into one list. Starting with …

10. James McAvoy and Michael Fassbender in X-Men: First Class – Through

the first three X-Men movies, Patrick Stewart and Sir Ian McKellan raised the characters/performances of Professor X and Magneto to iconic status. The odds of any actors slipping into the earlier life roles — and doing the characters justice — were remote at best. And yet both McAvoy and Fassbender brought the goods, making us believe those formative years were utterly real and how and why they developed into the elder versions of themselves we’re tied to forever.

8. Skyscraper Climb in Mission Impossible: Ghost Protocol: I did not like any of the first three MI movies, and Tom Cruise over the years went from movie star to raging D-Bag … and then MI4 hit the theater with a bucket full of holy crap! A generic plot and generally 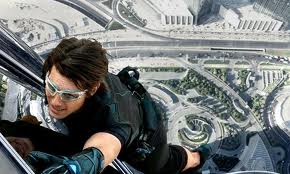 wooden performances, but this movie is two hours of heart pounding action that had me sucked in from the get go. And yet the ultimate show-stopper was watching Cruise’s Ethan Hunt scale the Burj Khalifia in Dubai –the world’s tallest skyscraper — in an aerial scene so visceral and extraordinary I almost blacked out. I don’t know how they pulled it off, but it’s not to be missed.

7. Brad Pitt in Moneyball – It’s tough enough selling a movie about baseball statistics and how they changed the way — to some degree at least — the modern ball club is constructed. But Brad Pitt playing real life general manager Billy Beane brings the goods, with his movie star looks and charm and the right mix of confidence and wounded soul that makes us care just that much more about a boys game run by very wealthy men.

6. Dexter, Season 6, Final Moment – The former best show on TV has become a shell of it’s former murderous self, but (SPOILER ALERT) the final moment of season 6, when our beloved serial killer is plunging his knife into the Doomsday Killer, and

Dexter’s sister Deb walks in on him committing the act? FREAKIN. AWESOME. It was a long time coming, and now the final two seasons have an end game in sight we can all sign up for.

5. Boardwalk Empire, Season 2, Final Two Episodes — Though a solid show, Boardwalk Empire has never quite lived up to its hype and potential. But the last two episodes of season 2 is some of the best TV … ever. Intense, shocking and utterly gripping. The layers of psychological madness and intrigue still haunt me weeks later. I’m not saying it’s the best crime show you’ll ever see, but the ending of season 2 would be difficult for any show to top.

4. Homeland, Season 1 – Hands down one of the best political thrillers of all time, with writing and performances that knock your socks off, particularly from Claire Danes and Damian Lewis. From the creator of 24 and former show runner of Dexter, you’ve  got a returned Iraqi war vet — back after 8 years of brutal captivity — trying to resume

a “regular” life. But has he been secretly converted into a terrorist against the U.S.? Or is the lone CIA operative who’s convinced of his betrayal falling victim to her own mental illness? Or both? Or neither? Tense, intense and just downright amazing.

3. Rooney Mara in The Girl with the Dragon Tattoo – I’m a huge David Fincher fan, and Dragon Tattoo is another winner on his resume. But Rooney Mara sells this movie. She was so utterly brilliant in a grueling role, that it will go down as

one of the most iconic performances in history. Like Christopher Waltz in Inglurious Basterds or Anthony Hopkins as Hannibal Lecter, it’s impossible for me to even imagine anyone else sinking into the character of Lisbeth Salander better than Rooney Mara. If she doesn’t win an Oscar, then Oscar should pack up his crap and go home.

watching Walt’s wife slowly fall in love with the gangster life, as his protege Jesse struggles to retain his soul despite all the awful things he does, and before our very eyes we’re watching Walt become a modern day Scarface. With only 16 episodes to go, this series can only end one way: with everyone finally breaking bad.

1. Game of Thrones, Season 1 – Essentially, this is a sexy, twisty, bloody, action-packed soap opera version of Lord of the Rings. So, yeah … full blown AWESOME. Going in I had absolutely no interest in Game of Thrones, but by the end of the 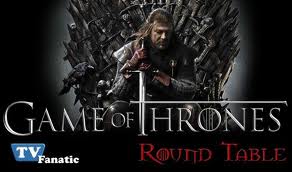 second episode I was hooked. And it only got better from there. More than just epic fantasy, it’s juicy storytelling on a massive scale. Run, don’t walk. It’s that good.

The Big Bang Theory, Modern Family, The Good Wife, Rise of the Planet of the Apes